Reliable and well-designed: PVC window frames are created from the most advanced technological research and a pure taste for aesthetics and minimal style.

PVC frames: when does PVC mean? 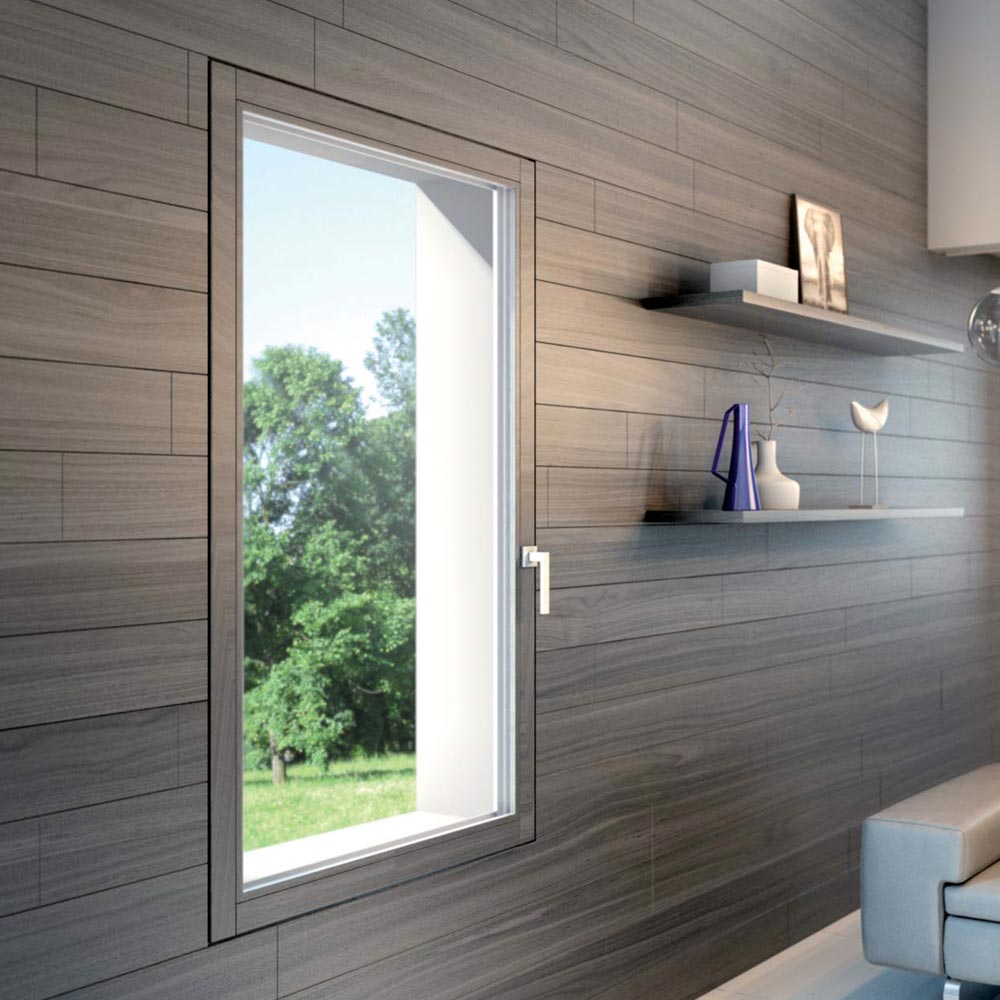 PVC stands for polyvinyl chloride, a thermoplastic material coming from natural raw elements such as chlorine, carbon and hydrogen, which lend specific physio-mechanical characteristics to PVC frames, whose key is versatility.

More specifically, polyvinyl chloride is the polymeric of vinyl chloride. It is the most important among polymerics obtained from vinylic monomers and is, today, one the most frequently used plastic materials in the world, given its great qualities of adaptability and durability. In fact, it was born as a rigid material, but the possibility of blending it with other compounds in great quantity – both inorganic or plastics – allows a versatile application and malleability.

The chemical composition of the polymeric is: 57% chloride and 43% between hydrogen and carbon. During the production phase other elements, such as stabilisers and lubricants, are added, to make it adapt to various applications, especially in the construction field, but also in the medical and chirurgical industries, in fashion, in design and for packaging, this thanks to its remarkable versatility and its aesthetic features.

Despite being characterised by a very modern appearance, PVC has a long story behind as it was one of the first synthetic materials used in the industrial production. Discovered by accident at the end of the XIX century by the French chemist Henri Victor Regnault, it was then patented in 1913 by the German inventor Friedrich Klatte. From the ‘20s recession to the use during the ‘40s war, from the strong recovery during the ‘50s to these days: PVC is a great quality material, essential for the frames and fixtures industry. Lately, thanks to the most advanced discoveries about technological and technical matters, PVC started to “go green”: aiming to eliminate all the fossil components and fuels during the production phase. This decision will make it not only an high-quality material, but also eco-friendly, more than it already is: it is in fact crucial to remember that the productive process of PVC is, already, very clean and little emissions of pollutants are released in both air and water. Furthermore, once its usefulness ends, PVC-made items are suitable to be recycled.

The advantages of choosing window frames made of PVC

Even though at the purest state PVC is rigid, during the manufacturing phase it becomes very malleable and this means that there are no limits in the possibilities of creation and adaptability of the product. PVC frames are different from the traditional window frames, as they lend to the room a personality twist, despite maintaining essential qualities such as security and comfort.

Being resistant to cold, wind, rain and other sever meteorological changes, PVC helps to keep the indoor temperature stable directly affecting the fuel consumption of the building and, at the same time, being an excellent protection against the outdoor noises. In addition to the convenient quality-price ratio, it is also fire-proof and recyclable, respecting not only the environment, but also the current norms regarding energy savings. Thanks to its seal, it is a perfect thermal insulant, able to reduce the consumption to zero impact and, for this, besides the convenient initial cost (we have, in fact, to remember that PVC is an affordable material, even though this trait does not compromise its performances, endurance and quality, but it simply means its production costs are lower), it allows considerable bill savings. Additionally, unlike materials such as aluminium, PVC is a “warm” material to the touch, perfect for those who are sensitive to the cold and do not want to give up on the sight outside their window or patio door, even when it is winter time. 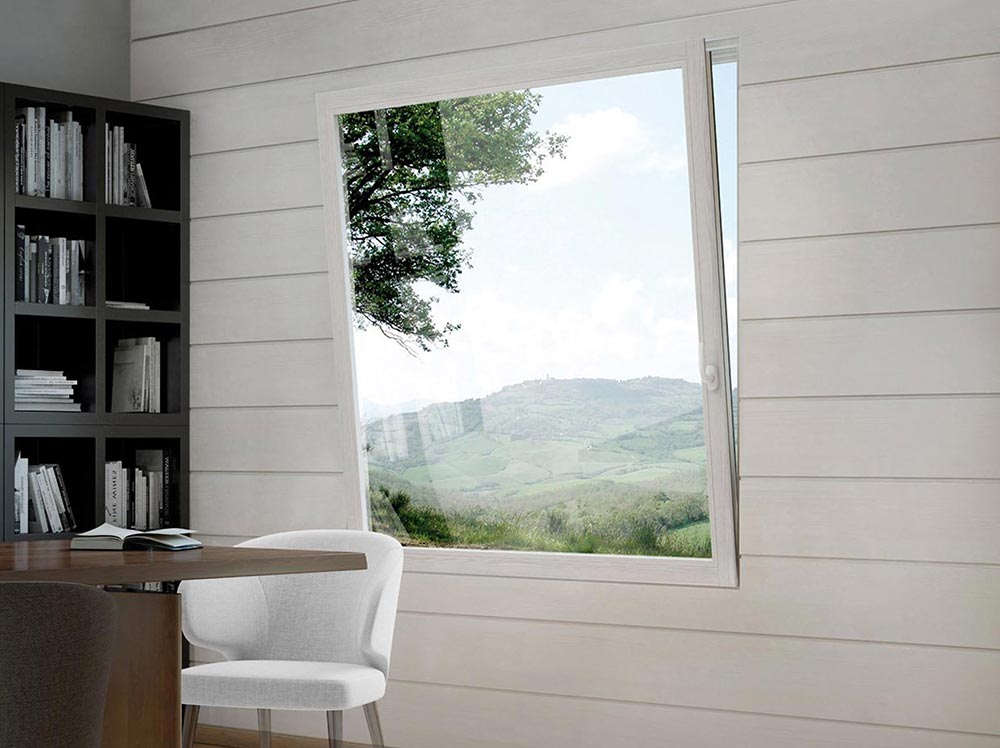 Lightweight and manoeuvrable, it is particularly adapt when wide windows and patio doors are preferred. Moreover, PVC frames are water-proof, reducing to the minimum the risk of infiltrations and not requiring a demanding maintenance, except for a quick intervention biannually, to preserve brightness and vivacity of the colours. To learn more, read our article “How is a PVC window made”.

All of these characteristics contributed, in time, to make PVC one of the three best-seller plastic products all over the world, used not only in the construction industry, but also in the textile, sanitary and informatic fields. Besides being sustainable and recyclable, it is especially not harmful for both the environment and human beings, therefore PVC window frames are suitable for who is allergic to acarus or dust, as they do not hold them.

If you are searching for an eclectic, contemporary and especially customisable with a minimum cost element, then PVC is what you are looking for. Not only for its shapes and possible locations, but also for its shades, fitting any request: the surface colour can vary from the classic nude colour – white, in this case – to paint or faux wood – complete of grains – to double colours – white for the inside, faux wood for the outside – if, for example, it is mandatory to respect the building’s standards in style. This is the reason why PVC is a raw material adapt to any kind of house, as much as it is suitable for frames and fixtures in offices and companies, as its main characteristic is always versatility. For any type of building, from the most traditional environment distinguished by wood, to a new contemporary, design complex, PVC frames are able to conform to the circumstances, ensuring long-lasting, flawless performances and, at the same time, considerable savings both short and long-term.

To find out more contact us or come and visit us!

This website uses cookies to improve your experience while you navigate through the website. Out of these cookies, the cookies that are categorized as necessary are stored on your browser as they are essential for the working of basic functionalities of the website. We also use third-party cookies that help us analyze and understand how you use this website. These cookies will be stored in your browser only with your consent. You also have the option to opt-out of these cookies. But opting out of some of these cookies may have an effect on your browsing experience.
Necessary Always Enabled
Necessary cookies are absolutely essential for the website to function properly. This category only includes cookies that ensures basic functionalities and security features of the website. These cookies do not store any personal information.
Non-necessary
Any cookies that may not be particularly necessary for the website to function and is used specifically to collect user personal data via analytics, ads, other embedded contents are termed as non-necessary cookies. It is mandatory to procure user consent prior to running these cookies on your website.
SAVE & ACCEPT